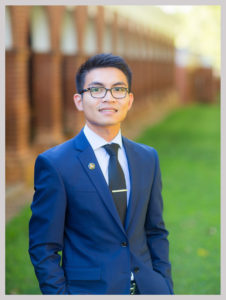 Growing up in abject poverty and raised by a single-mother education was almost too far to pursue for Thomith Chin. There were many times that he could not afford to pay a one-dollar monthly fee for an English class taught by a monk in the monastery when he was in Cambodia. Breakfast and lunch were often a trade-off with a part-time class fee. He had to skip either one of them or both to save money to pay for classes. He managed to graduate from high school in 2012. However, unfortunately, he could not continue on his journey to the university because of his family livelihood.In 2014, he moved to America with his mother and younger sister to Providence, RI. It was not too easy to start a new life in a country that is so far away from home, family, and friends. Thomith had to work in a factory as an assembly line worker in Uxbridge, MA, while he attended English-as-a-second-language- classes at the Community College of Rhode Island (CCRI). He later graduated and earned an Associate’s degree in Business with the Highest Honor there in 2017.

Currently, Thomith is pursuing a Bachelor’s degree in Political Philosophy, Policy, and Law and a Master’s degree in Public Policy at the University of Virginia (UVA) to continue to fulfill the education dream. Getting on and off the bus to the central ground at UVA and seeing students from all around the world walking to classes every day in joy, Thomith often keeps thinking about his childhood experience and thousands of young people in Cambodia who are living in poverty or sharing similar life struggles that he once was. One day, he decided to take action and thus International Youth for a Better World was born to help young people who are living in poverty to overcome struggles and fight for their dream.

Thomith once said, “I thought about the phrase that senior people always tell young people like us that we are the backbone of society and the world. But when we look at those conference rooms, we do not actually see young people there. Most of the critical and powerful positions are held by not young people. Almost all important decisions that are incredibly impactful to our society and world are mostly not made by young people. So is it fair to say we, the young people, are the pillars or the backbone of our society and the world? Are we just hypnotized by this nice phrase? So now, let’s make what we are told a reality.”