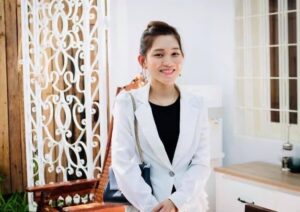 Sreynou held her Bachelor of Arts in International Studies at the Institute of Foreign Languages (IFL), Royal University of Phnom Penh (RUPP), Cambodia (2010-2014). In 2017, she won a New Zealand- ASEAN Scholarship (NZAS) Award to pursue her Master of Arts in Public Policy at The University of Auckland (UoA), New Zealand (2018-2019).

Been working at the General Department of ASEAN for several years since 2014, Sreynou is currently working at the Analysis and Forecasting Department of Economics and Global Challenges at the Ministry of Foreign Affairs and International Cooperation of Cambodia (MFA.IC). This is another new opportunity to utilize her skills after her return from study abroad. Not only been involved in the public sector, she was also working as a part-time Teacher of English at the Western International School and Milky Way School (2012-2014).

For her brief achievements, Sreynou was nominated as a Cambodian representative to attend the “ASEAN Next Generation Leaders Visit Korea 2016” organized by the Ministry of Foreign Affairs of the Republic of Korea and Korea Foundation, Seoul, Republic of Korea in 2016. She also joined various seminars and workshops on leadership and communication, few among them, including, the ASEF Capacity Training on Leadership and Entrepreneurship, at the Intercontinental, Cambodia and the Lower Mekong Initiative (LMI) Professional Communication Skills for Leaders Program, IFL, Cambodia in 2014 and 2015 respectively. She was also selected as a participant to join an exchange program “3rd NIDA Summer Camp: Sustainable Tourism”, offered by the National Institute of Development Administration, Thailand in 2014. She also won the second honor of final round “You and I” program (Literature and Poem Competition) on National Television of Cambodia, in April 2010 in addition to the achievements of special awards of admiration (level 4-12) at Beltie International School, Cambodia, between 2007 and 2010.